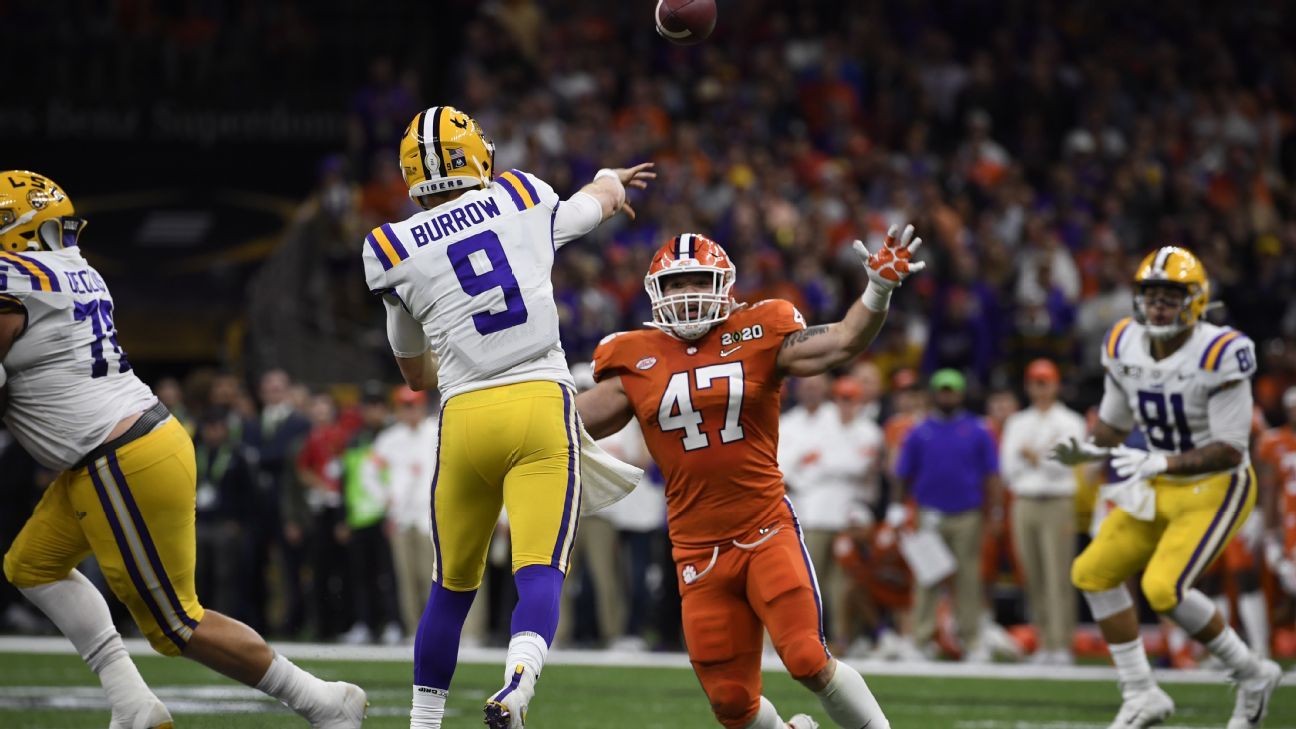 Burrow initially tied the records of 58 touchdown passes and 63 touchdowns responsible for, set by Hawai’i’s Colt Brennan in 2006, with a 6-yard touchdown pass to Thaddeus Moss with 10 seconds left in the second quarter. He hit Moss again in the third quarter for a 4-yard score to take sole possession of both marks.

In the fourth quarter, Burrow found Terrace Marshall Jr. for a 24-yard score to give him 60 touchdown passes on the season.

The senior quarterback threw five touchdown passes in total and ran for another score in leading the Tigers to their first national title since 2007 and fourth overall, breaking a few more records along the way in what was already an historic season. His five TD passes and 463 yards passing marked the most for a BCS or College Football Playoff title game, as did his six total touchdowns.

“This is what I wanted to do from the time I was 5 years old, was hoist this trophy, and bringing it back to Louisiana,” Burrow said, then caught himself. “I guess we’re in Louisiana, but staying in Louisiana, we weren’t going to let someone come in here and steal this from us in our home state.

“We have a great fan base that came out and supported us. We were going to keep this thing right here.”

One of Burrow’s top targets on the night was Biletnikoff Award winner Ja’Marr Chase, who dominated his matchup against Clemson’s best cornerback, A.J. Terrell. Chase finished with nine catches and 221 yards receiving, the most in a national championship game since the BCS was instituted in 1998.

Chase had several explosive plays, including a 52-yard touchdown catch in the first quarter. The LSU record for receiving yards in a bowl is 239, set by Josh Reed in the 2002 Sugar Bowl versus Illinois.

Burrow appeared to pay a price for the first Moss TD. Clemson junior linebacker James Skalski came across the line, unblocked, on a blitz and landed a big hit to Burrow’s rib/arm area right after he released the ball.

Burrow returned to the field well before the halftime break ended, which is rare for a starting QB. He rode a stationary bike for three minutes on the sideline, then went through some throws on the field, grimacing slightly as he looked at his hand.

Burrow said after the game there was no issue.

After throwing his fifth touchdown pass of the night, Burrow celebrated by pointing to his ring finger. He later said the team had already been fitted for championship rings, and that he wears a size 10.5.

“He’s one of the greatest players in LSU history,” Tigers coach Ed Orgeron said of Burrow. “He’s done so much for the state of Louisiana and LSU. We are so grateful to Joe Burrow.”

The Heisman Trophy winner holds school and SEC records for passing touchdowns and passing yards. He’s the only player in SEC history to throw for both 4,000 yards and 40 touchdowns. He far exceeded those marks with 5,671 yards and 60 scores.

On top of that, Burrow — who transferred from Ohio State ahead of the 2018 season — has school single-season records for completions, total offense, passing yards per game and total offense per game.

The Associated Press contributed to this report.

USA’s Decker out for Games after injuring leg