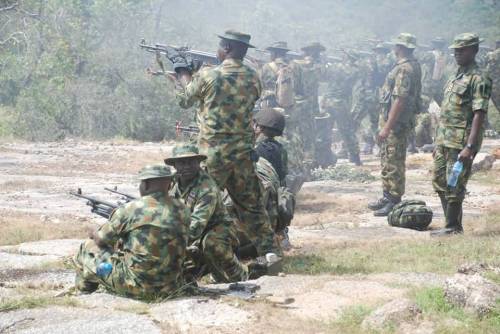 The Nigerian Army has failed to reinstate 38 sacked officers despite a court order rescinding the decision.

The army had in June 2016 announced the compulsory retirement of 38 officers on different ranks on the ground of alleged professional misconduct, Daily Trust reports.

Many of the affected officers had subsequently instituted suits individually against the Nigerian Army; Nigerian Army Council; the Chief of Army Staff, Armed Forces Council; Chief of Defence Staff; and the Attorney-General of the Federation.

Other officers were sacked or compulsorily retired at different times.

They claimed this was after exhausting internal mechanisms for redress without success. They, therefore, approached courts and got favourable judgements to be reinstated, but to no avail.

The dismissal and compulsory retirement issues were also deliberated upon by the Senate and the Federal House of Representatives, with a call on the Nigerian Army to reinstate the affected officers.

Major-General Ibrahim Sani, who was the Chief of Transformation and Innovation at the Nigerian Army headquarters before his dismissal said the court order for his reinstatement had not been obeyed, two years after.

Following the judgement nullifying Sani’s dismissal on the ground of lack of fair hearing, his legal team, led by Magaji Mahmud, a Senior Advocate of Nigeria (SAN), disclosed that the implication of the appeal verdict was that “the special court-martial, the proceedings, conviction and sentence of the court never existed in the eyes of the law.”

While setting aside the dismissal, the Court of Appeal held that the military court-martial that convicted him breached his right to fair hearing as contained in section 36(6) and (7) of the Nigerian Constitution, 1999.
General Sani was arraigned on May 20, 2016 before the court-martial without any charge levelled against him. On July 4, however, nine counts bordering on service property, making of false documents and cheating were filed against him. The charge bordered on his role in the facilitation of allocation of a parcel of land in Asokoro, Abuja, which was applied by and allocated to some officers of the Nigerian Army, Air Force and Navy by the minister of the Federal Capital Territory.

Also, Lieutenant -Colonel Abdulfatai Mohammed, who was also ordered to be reinstated by the National Industrial Court of Nigeria in Abuja in January 2020 following his unlawful retirement over allegations of misconduct relating to the 2015 general elections, has not been reinstated.

The presiding judge, Rakiya Haastrup, in the judgement, had held that the unlawful retirement was unconstitutional, illegal, null and void and unsustainable, and ordered the payment of all his outstanding entitlements.

This order was followed by a contempt proceeding against military chiefs before Justice Edith Agbakoba of the same court in May 2020 over their failure to comply with the earlier judgement of January.

Abdulfatai led military operations in Konduga against Boko Haram as the commanding officer of 195 Battalion at the height of the insurgency in 2014 and 2015 in the North-East when Boko Haram was seizing territories.

He earned a commendation from the then Chief of Army Staff, Kenneth Minimah, for gallantry after his battalion teamed up with others to rout the advancing insurgents from reaching Maiduguri following their capture of Gwoza, Bama and Kawuri, and mobilised to recapture the towns.

In December 2021, the National Industrial Court in Abuja ordered the Nigerian Army Council to immediately reinstate Brigadier-General Abubakar Hanafi Sa’ad, five years after he was thrown out of service.

The president of the court, Justice Benedict Kanyip, in a judgement in a suit instituted by General Hanafi, held that the Nigerian Army acted against the law by throwing the plaintiff out of service without following the due process of the law.

The allegation of a serious offence levelled against the brigadier-general during the trial of the suit was rejected by Justice Kanyip on the ground that such was not contained in the purported letter of compulsory retirement.

Sa’ad, a former director of Military Intelligence, was believed to be connected to a panel he set up to probe the misconduct of some military officers during 2014/15 elections, especially the Ekiti and Osun elections at the 1 Division of the Nigerian Army in Kaduna.

His name was said to have been dropped after being initially recommended for promotion to major-general in 2015, from where he was removed as director of military intelligence and posted to the Defence Headquarters (DHQ), where he was compulsorily retired five months later without any charge for any wrongdoing.

Similarly, in June 2019, the National Industrial Court in Abuja nullified the 2016 dismissal of Major-General Ijioma Nwokoro Ijioma, who was serving in the Nigerian Army headquarters annexe in Abuja after an excellent service in various sectors of the army.

In the judgement, Justice Agbakoba held that the retirement on disciplinary ground, which was contained in a letter dated on June 9, 2016, was “illegal, invalid, wrongful, unlawful, unconstitutional, null and void and of no effect whatsoever,” having violated the provision of paragraph 09.02c (4) of the harmonised terms and conditions of service for officers of the Armed Forces (HTACOS) 2012, revised.

The judge observed that the action of the army did not follow due legal process, adding that “there was no evidence of trial or court-martial by Army Council” before the retirement, which he said was a breach of fair-hearing guaranteed under section 36 of the 1999 Constitution.

The judge affirmed the order of the court on July 26, 2016, which barred the army from documenting Ijioma’s retirement, and ruled that he was, by the judgement seen, as having never been retired from the army.

While restraining the defendants from obstructing the judgement, the judge, however, refused to award the sum of N6billion damages in his favour.

Also, Justice Sanusi Kado of the National Industrial Court of Nigeria in February 2020 ordered the reinstatement of Colonel Auwal Suleiman for not following due process. The judge set aside the Army Council’s explanation that Suleiman was retired due to an “overstay of 18 years in service.”

Among many achievements, Suleiman coordinated operations that led to the arrest of about 377 Boko Haram terrorists in 2009. He also played an important part in the establishment of the Civilian Joint Task Force (CJTF), the body of volunteers fighting terrorists alongside the government forces. He was among 38 army officers compulsorily retired in June 2016 without a query or indictment for any offence.


On May 15, 2019, the Economic Community of West African States (ECOWAS) reinstated over 244 soldiers dismissed from the Nigerian Army in 2016 after they had allegedly absconded from the Boko Haram fight.

In the suit brought by Sergeant Mikah Rango and 243 others against the Federal Republic of Nigeria in suit number ECW/CCJ/APP/19/16, judgement number ECW/CCJ/JUD/21/19, the ECOWAS Court found that the dismissal of the personnel of lower ranks in 2016 without trial and sentence by a duly constituted court-martial did not comply with the provisions of the law and violated the various protocols and conventions that Nigeria is a signatory to, including the right of the applicants to work.

Justice Keikura Bangura, the judge rapporteur, held that the sacking violated the rights of the personnel to fair hearing as provided in the Nigerian constitution and the African Charter on Human and People’s Rights.

The regional court also ordered payment of arrears of their salaries, allowances and other entitlements up to January 2016.

Also, a human rights lawyer, Femi Falana (SAN), in 2015, successfully appealed the court-martial, which sentenced 70 soldiers to death for demanding for weapons to fight in the Boko Haram insurgency in 2014 and had them commuted to jail terms. Years after all the judgements were given, counsel to the soldiers, Falana said the Nigerian Army was yet to comply with any of the orders.

#EndSARS: The Situation Would Have Been Different If Buhari Hadn’t Exercised Tolerance Of A Father, Says Femi Adesina