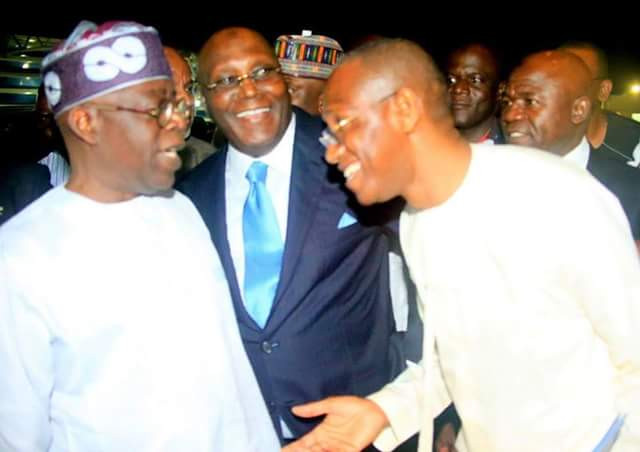 Labour party presidential candidate, Peter Obi has commented on All Progressives Congress candidate, Bola Tinubu and Peoples Democratic Party candidate, Atiku Abubakar contesting against him in the 2023 presidential election.  Reacting to the controversy that trailed his disclosure of a social media user sending out a message and telling people not to vote for him because it would mean sea ports will open in other regions and there would be no investment in Lagos, Obi said he brought it up to explain why such messages shouldn't be sent out.  The Labour Party presidential candidate in an interview with Chude Jideonwo, also noted that there is need to develop sea ports in other regions in the country as some properties have been abandoned in Apapa area of Lagos because the congested seaport in the area has made things messy. He also noted that Lagos is the financial hub of the country. Also acknowledging the efforts of Tinubu and Atiku in building the country, he however stated that people shouldn't hang on forever but should do their bits and move on. Obi who added that the efforts of these individuals in nation-building should also be acknowledged, concluded by saying that because "Pele was a star does not mean he’ll be fielded by Brazil in a match today".  Watch a video of the interview below…      View this post on Instagram           A post shared by Lindaikejiblog (@lindaikejiblogofficial)The post Because Pele was a star does not mean hell be fielded by Brazil in a match today – Peter Obi speaks on Tinubu and Atiku contesting 2023 presidential election with him (video) appeared first on Linda Ikeji Blog. Click Here to Visit Orignal Source of Article http://www.lindaikejisblog.com/2022/9/because-pele-was-a-star-does-not-mean-hell-be-fielded-by-brazil-in-a-match-today-peter-obi-speaks-on-tinubu-and-atiku-contesting-2023-presidential-election-with-him-video.html