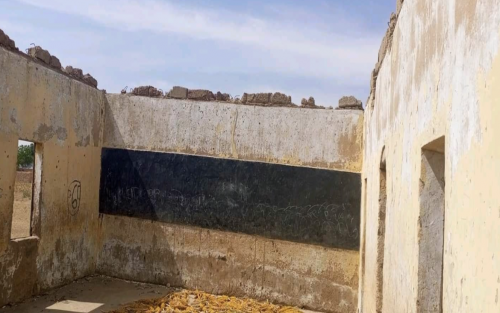 Education in Kano State is falling apart, especially the public schools. Despite the programmes to stop pupils from dropping out of school, the problem is worsening.

A 2015 report by EduCaleb noted that the number of drop-out pupils in Kano State reached four hundred thousand. However, in recent reports, the state has recorded nearly a million dropouts.

To prevent dropout and improve learning, the state government introduced a free and compulsory education scheme in November 2020. Abdullahi Umar Ganduje, the governor, signed the bill but little has been done to upgrade the schools which are mostly in bad shape.

The law empowers the state to sponsor all children from primary to secondary school for free and compulsory education, requiring the state to provide uniforms, reading materials, conducive teaching classrooms, and free feeding to the students.

According to the law, any principal or teacher found collecting any amount either from parents or students would pay N20,000 as a penalty or spend one month in jail. Also, parents, who refuse to send their children to school will be charged, either one-month imprisonment or to pay a N20,000 penalty.

But public schools have remained neglected since the law was passed.  Findings by the reporter show that many students drop out of school due to dilapidated classrooms, lack of qualified teachers, and overcrowded classrooms.

For example, the Unguwar Dagachi Primary School has only three blocks of classrooms which are now highly dilapidated with broken walls, floors, and ceilings.

Ashafa Gambo Beli who is an education advocate in Beli in Rogo Local Government Area wrote that “Dagachi primary school has been in dilapidation for about 5 years. This school particularly is under the scheme of the free and compulsory educational scheme. Students of this school have mostly dropped out of school as they focused more on hawking chilies because their classroom is not good enough for learning.”

A former student of Government Senior Secondary School Gwale pointed out that the poor implementation of free education has affected the quality of education in the state.

“Before the introduction of the free and compulsory education scheme, students usually paid 700 naira per term which was used for the management of the school and also paid teachers some tokens which were mostly voluntary,” the ex-student who did not want to be mentioned by name said.

“The introduction of free and compulsory education has ruined the education system because the government warned the principals of all schools from collecting money. However, teachers became scarce in schools as principals couldn’t raise money to pay teachers and maintain schools,” he added.

But current students still pay fees in some of the public schools. Students are responsible for buying chalks, brooms, blackboards and also contribute money for cement to seal crack walls in the school,” said a current student.

“We sit on the floor and learn, which is so uncomfortable for us, ” the student continued. “Whenever we complain, the school management responds with ‘we are tired of complaining to the government’. I don’t think the Kano state government is ever ready to fix education despite the huge budget for education.”

A principal of one of the public schools who spoke on the condition of anonymity said, “The recent renovation that took place was politically motivated because some schools who are most in need of the renovation were not chosen but renovated the ones they felt to repaint and pocket the rest of money. We need to restore the dignity of education in the state because we keep having the highest number of exams failure, school dropouts, and dilapidated structures.”

Another principal from another public school Kano said, “The free and compulsory education is a scam and politically inclined to their interest. Before the introduction of the scheme, students pay services of 700 naira which 500 is used for educational support charges while 200 naira is for the PTA levy. When the government discovered it couldn’t keep to its promise after a session, they later said the PTA agreed on the amount of 200 naira should be collected from pupils.”

“The collection of the 200 nairas started the last session, during the 2020 session when the free and compulsory scheme was introduced the government was giving upkeep allowances which we used to buy chalks, boards, and other teaching materials. The upkeep allowance is given after 3 months depending on the headcount of the students in the school. Suddenly the upkeep allowance stopped. From 200 naira collected from students, we buy chalks, first aid boxes, hospital bills, and also the heads of the PTA will be waiting for their percentage.”

Concerned principals in the state said it is worrisome that the government officials who implemented free and compulsory education still extort money from public schools.

“If a principal is managing a well-populated school, they expect the management to issue them brown envelopes even if they will come 100 times in a day,” a principal said. “They extort from the public schools which are supposed to be free and compulsory,” a principal lamented.

In a review of the state’s Education Strategic Plan of 2018 to 2027 final draft published in October 2017, the state government vowed to put all efforts to bring an end to the failing of public schools education in Kano state by 2027. However, progress is still hard to achieve as none of the goals stated in the document has fully been achieved.

This report was produced in partnership with Civic Media Lab School Report, an initiative to improve accountability and transparency in local education delivery, with support from the MacArthur Foundation.

Nigerian Romance Scammer In US Jailed Three Years For Duping Men, Women Of $900,000