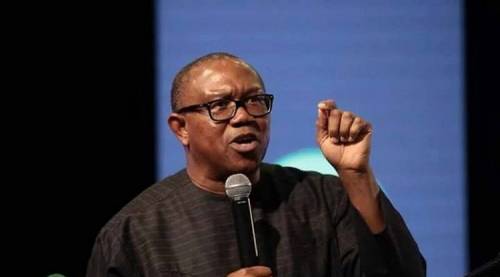 Former governor of Anambra State, Peter Obi, has revealed that he would contest the 2023 presidential election if the Peoples Democratic Party zones its ticket to the South or throws it open for all interest aspirants to contest.
Obi made the remarks through a statement by Val Obienyem, his media aide.

The statement quoted the former governor as saying that he was capable of turning around the fortunes of the country but will wait on the decision of the PDP before he declared his intention.
The statement reads, “All the elections that I followed in the past, the party that I belong to today, the PDP made a pronunciation and took a stand. At least in 2019 when I was involved, where I can say Atiku graciously chose me as his running mate which I remain eternally grateful to him for, the party decided that the candidate should come from the North and that was what the party decided.
“And I believe that the party owes it a duty to say what their stand is. If their stand today is south, be rest assured I am aspiring, if they say north, I can’t do otherwise or they chose the option that everybody is free, then, of course, you will be hearing from me.
“What we are looking for in this country today are people of integrity, people of conscience, people who are less greedy. Educational qualification is not a measure of integrity; it doesn’t guarantee that somebody is less greedy or that people have a conscience.

“I have seen people here acquire what they don’t need. I saw it while I was serving, to fight corruption here, you need somebody who has integrity, who is not greedy, who has conscience if you have that, fighting corruption is easy, because, if you who is in charge is not stealing, you will reduce stealing by 50 to 70 per cent.
“And it is critical that you have somebody who is like that. It is not when people are acquiring lands, houses, everything they don’t need; they want to live a lifestyle that is far beyond the economy of Nigeria, far beyond their earnings, that is why the place is collapsing. That is why we have insecurity, that is why we have poverty. We need to manage the costs efficiently and these are the critical areas as you people know as you look for people who will govern the country in the future.”

Glanville: Bonds shouldn’t be a Hall of Famer — and that’s OK

Family wants no contact with accused US IS member

Buhari Protecting His Regime, Not Nigerians, To Avoid Repeat Of 1985 – Odinkalu