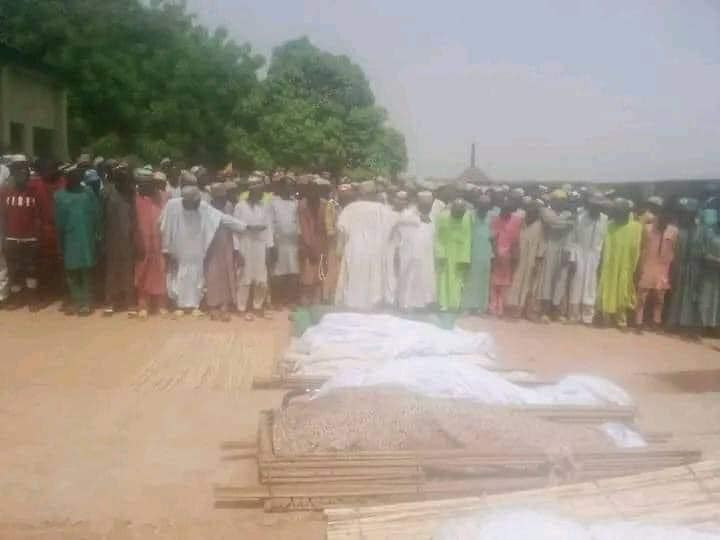 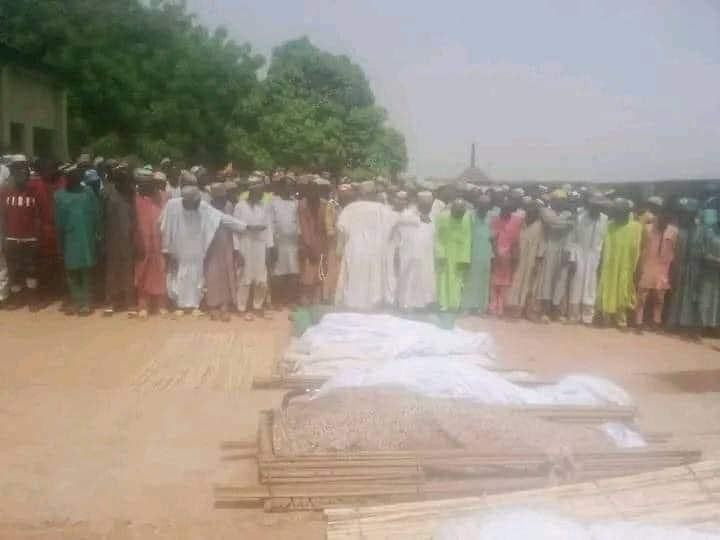 Photo from the funeral of some of the victimsAt least 48 persons have been reportedly killed when armed bandits attacked three communities in Zamfara State. The communities are Sabon Gari Damri, Damri and Kalahe in Bakura Local Government Area of the state. The Sole Administrator of Bakura Local Government, Aminu Suleiman, who confirmed the attack to Channels Television on Saturday May 7, said the bandits, in their large number and riding on motorcycles, launched an attack via Sabon Gari Damri village around 2pm on Friday.  They killed nine people and then proceeded to Damri community where they killed four persons including a police officer and personnel of Nigeria Security and Civil Defence Corps (NSCDC). The terrorists also set ablaze a Hilux vehicle belonging to the Nigerian Police. The bandits then killed eight persons in Kalahe community, a village between Sabon Gari Damri and Damri town. According to Suleiman, the bandits attacked a healthcare facility in Damri town and killed some patients who were receiving treatment in the hospital. "The bandits in their large number were on motorcycles with three persons on each motorcycle first attacked Sabon Gari Damri and killed four people,” he said. "Gradually they entered Damri town, burnt one Hilux vehicle belonging to the Nigerian Police, they killed one Police officer also and one Civil Defence officer.” According to the Council boss, the military engaged the bandits in Damri community in a fierce gun battle which forced the bandits to retreat back to Sabon Gari Damri and kill 26 persons. "Military personnels entered the town and exchange fire and forced the bandits to move back to Sabon Gari Damri, after killing nine people at the village, they went back and killed about twenty-one people." he added. 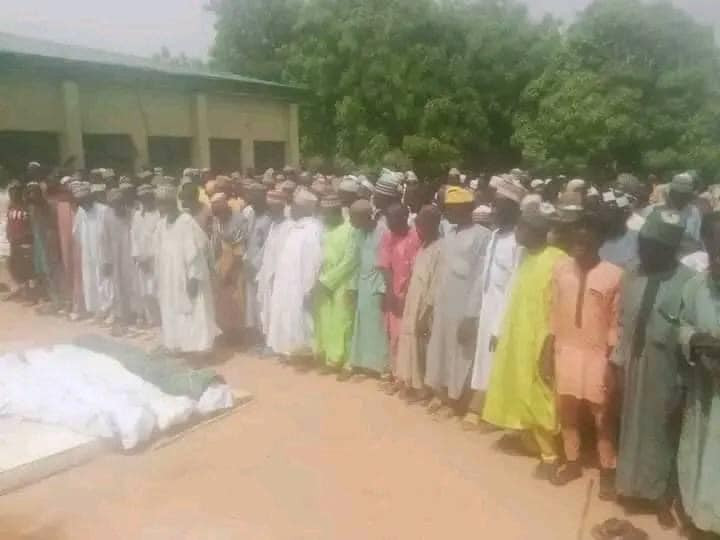 Though the Council chairman said a total of 48 people were killed during the attacks, other sources, including a former councilor told Premium Times that the number of those killed as at Saturday afternoon stood at 56. "We counted 56 people. In Damri, only three people were killed; a girl and two other men but the remaining were all killed in Sabon Garin Damri and Kalahe. Some of them were not residents of the two communities. They were people who came from nearby villages to celebrate Eid El Fitr with their relatives” councilor said. Another resident of Bakura Town, Usman Lauwali, also told the publication that 56 people were confirmed dead by residents of the three communities.  The post Terrorists attack Zamfara communities, kill 48 including police officer and NSCDC personnel appeared first on Linda Ikeji Blog. Click Here to Visit Orignal Source of Article http://www.lindaikejisblog.com/2022/5/terrorists-attack-zamfara-communities-kill-48-including-police-officer-and-nscdc-personnel.html