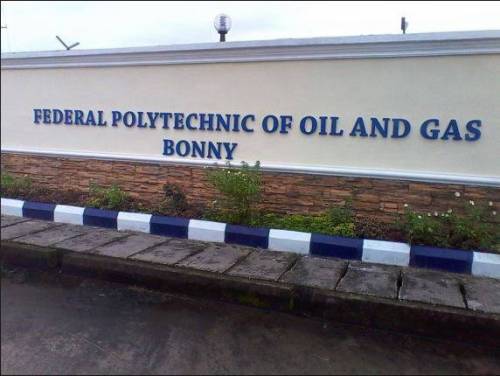 The rector of the Federal Polytechnic of Oil and Gas, Bonny, Prof. Tamunoimi Michael Abbey has accused the institution’s governing council headed by Otunba Dayo Adebayo of corruption.

Tamunoimi disclosed this in a letter sent to the Minister of Education, Adamu Adamu.

He accused the council chairman of subverting due process and executing projects in the institution through his cronies and private companies.

“The advent of the recently inaugurated Governing Council headed by Otunba Dayo Adebayo has cast a shadow of doom and a spell on the institution, throwing the entire system into disarray, anarchy and disharmony. Post-inauguration meeting held at Abuja clearly expose the raison d’etre of the Governing Council,” Tamunoimi said.

“The first question they asked was how much the polytechnic has in its account. Secondly, they are politicians, scavenging for money. Immediately they started asking for contract awards, kickback and mobilisation of funds. To appease the chairman due to his consistent pressure mounted on the institution, the bursar has to arrange 20 million naira to the chairman and 6 million naira to Dr. Doshuro, a member of the council at the first instance from some of the contractors.

“Also, during their second visit which ended in September 2021 of which they spent more than two weeks, the chairman and Dr. Doshiro refused to go when others were leaving. They insisted that they needed money to solve some basic problems. The pressure was so much that the bursar has to invite in a contractor to raise five million naira for them, 3 million naira for the chairman and 2 million naira to Dr. Doshiro. The contractor paid this money to their respective accounts, keeping the institution in debt.

“In order to force the institution to raise more funds for them, the council shifted their visit that was scheduled for December 15th to 20th, 2021 to November 15th, 2021, and their meeting lasted for two weeks. This unorganized governing council meeting despite the financial position of the polytechnic revealed to them by the bursar was designed to pressure us to source more funds for them. Because I objected and questioned the rationale for this type of unplanned meeting, the chairman and Dr. Doshiro, got angry and incited some members of staff who partner with them to blackmail me.

“It should be noted that the duration of the council meeting according to regulation should not exceed four days but this council always stayed for two weeks or more at the expense of the polytechnic. The development resulted in both sponsored meetings held two weeks which were to be payback when overhead is release by Federal Government.”

The rector said the council in November 2021 asked him to proceed on sick leave even when he didn’t ask for it.

While on sick leave, the council on January 7, 2022, illegally appointed one Ibifiri Pollyn as the acting rector even when the seat of the rector of the institution had not been declared vacant.

He said, “Consequently, the council at the meeting hijacked the administrative machinery, forcefully, directed I should go for unsolicited compulsory sick leave/ annual leave, setting up committees, replacing the Director of Works and Services, Director of Procurement and Internal Auditor. As if this was not enough, they further appointed of unconsented, unconsulted Mrs. Ibifiri Pollyn whose transfer of service from Federal College of Education Technical, Omuku has not yet been accepted, as the deputy rector and on the same date the acting rector.

“The recommendation was made by the bursar who described her to the Council as ‘Easy going’. Clandestinely for the council to have control of the finances, and do as they like, they directed for an immediate change of signatories, against the laws. The council who are supposed to supervise and advise has taken over the management affairs, writing letters to contractors, TETFUND, and accountant general office among others, against these issues, necessitated the call for honourable Minister intervention, as their plan is to take advantage of the minister’s absence to do away with me as the stumbling block.

“Honourable Minister sir, the chairman along with Dr. Doshuro, the bursar, Mr. Mohammed Idris and Mrs. Ibifiri Pollyn, the imposed acting rector were seen presently at Abuja, moving from one table to another in the accountant general office trying to effect changes to the signatories of the polytechnic account on the GIFMIS and REMITA platform. This is done to siphon the fund of the polytechnic. In fact, the attached evidence is a case in point where the imposed acting rector, not even more than seven days has started directing the release of funds from the REMITA platform, I wish this will not affect the dedicated TETFUND project fund.

“The governing council, in a letter dated January 4, 2022, informed me that I have been suspended from office for 3 (Three) months. They had earlier in a letter dated 25th November 2021 asked me to proceed on an unsolicited Sick leave and Annual leave. The sick and annual leave were to terminate on the 11th of January, 2022, but the governing council held an emergency meeting on 4th January, 2022 in which I was not invited, and decided to place me on an unwarranted 3 months suspension without following due process.

“Hon. Minister sir, the council is unnecessarily assuming the power that is the exclusive right of the President of the Federal Republic of Nigeria. Their action negates the spirit of what is stated in Section 16(1)of the Federal Polytechnic Act 2019 (as amended) which states that “if it appears to the Council that a member of the Council (other than an ex-official member), or the rector should be removed from office on the ground of misconduct, or inability to perform the function of his office, the council shall make a recommendation to that effect to the President and if the President, after making such inquiries as he considers necessary, approves the recommendation, the President shall in writing, declare the office of such member or Rector vacant.”

“Sir, from the above, it can be seen clearly that it is only you and the President that can direct the suspension of a sitting rector. The council can only recommend any observed misconduct to the Honourable Minister who has the power to set up a panel of inquiry to properly look into the allegation and recommend an appropriate sanction. Sir, a situation in which the council is the complainant and at the same time, the Judge, as well as the Body of Inquirer, negates the principle of fair hearing and justice. For justice to be done, I beg that you, on behalf of Mr. President, constitute a Panel of Inquiry to properly ascertain the veracity of their complaint. Even the Almighty God sought an explanation from Adam before punishing him.

“Therefore, the purported suspension and the subsequent panel in which the members are members of the governing council is very unacceptable. The administration of His Excellency, the president of the Federal Republic of Nigeria came in with a mandate of transparency to remove corruption. The action of the council is an encouragement of the same.

“However, reliable confidential sources confirm that monies were paid to some contractors, such as Omasolo, without the Bursar’s knowledge. The attached (Annex VII) Whatsapp message discussion of Mr. Alawari and Mr. Adedoyin with the bursar (Mr. Mohammed Idris) shows that the bursar has full knowledge of all transactions and movement of funds in and out of the School.

“The Whatsapp message further revealed that some of the funds were diverted to the council members in the Otunba Dayo Adebayo led council. These council members, particularly Dr. Musa Doshiro and Chairman Otunba Dayo Adebayo cannot deny receipt of such funds paid into their bank account respectively; neither can the bursar deny receiving monies from his bank account.

“Sir, all transactions in the school have approval from necessary government agencies and the Polytechnic Management as well as the Tender Board. Some of these due process approvals are hereby attached (Annex VIII) for your perusal. I have tried to work hand in hand with the members of this Council within my possible best, letting them know that the little resources that come our way should be used to advance the progress of the Polytechnic. Unfortunately, my efforts have been constantly met with the threat “we were asked to come and suspend you.”