Legal practitioner, Ebun Adegboruwa, has kicked against the charges filed against the suspects arrested over the gruesome murder of Deborah Samuel, a student of Shehu Shagari College of Education, Sokoto. Two suspects identified as Bilyaminu Aliyu and Aminu Hukunchi were arraigned before the magistrate court on Monday, May 16. The court ordered that the suspects be remanded in the custody of the Sokoto Correctional Center. In a post shared on his Facebook page, Adegboruwa kicked against the charges filed against the suspects. According to him, it is an insult to the parents of the deceased, to Nigerians as well as God who created Deborah. He alleged that the state government has by the charges filed shown it is 'complicit in the whole case.' Read his post below ''THE CONSPIRACY IN SOKOTOThere is need for genuine reconciliation in this matter.The criminal charge of Criminal Conspiracy and Inciting Public Disturbance as framed by the Sokoto State Government against hardened murderers is an insult to the sensibilities of the parents of the deceased, the people of Nigeria and God who created Deborah.This crime took place in an enlightened environment in a higher institution, under the watch of security men, who were said to have been overpowered.It all started from a WhatsApp group, which has identified leaders. There are students who sent messages and threats of death on that platform. Their phone numbers are registered with NIN identification. They belong to a class in the school so they are known individuals.Images of persons who openly and boastfully confessed of partaking in the murder abound, with one displaying the match stick with which the deceased was set ablaze.The government of Sokoto State has by these charges shown itself complicit in this whole drama and it is most unfortunate, for a State that is headed by a lawyer, a former Speaker of the House of Representatives and who is aspiring to rule Nigeria as its President.It is most uncharitable of His Excellency to have condoned this baseless charge. It is better to set the suspects free rather than claim to try them.The aftermath of this gruesome murder, the watery charges filed and the consenting attitude of those concerned have depressed me more than the act itself.Nigeria cannot work this way at all. I’m truly saddened by this development.I expected Governor as Visitor to that school to have visited the parents of the deceased, who trusted the authorities and sent their ward to school from Niger to Sokoto State, in furtherance of the mantra of a United Nigeria.If the impression we get with all these charges is that the State itself endorsed the murder of the deceased, then we are sowing the seeds of discord and fragmentation.The political ambition of Governor Aminu Tambuwal should not override the life of a citizen entrusted to his care but who was murdered in cold blood. It is better for His Excellency to resign now, rather than go down in history as the Governor under whose watch a citizen was murdered and the Governor could not enforce the laws of the land but rather aided and abetted its cover up.It is Governor Tambuwal who is actually on trial in this case.'' 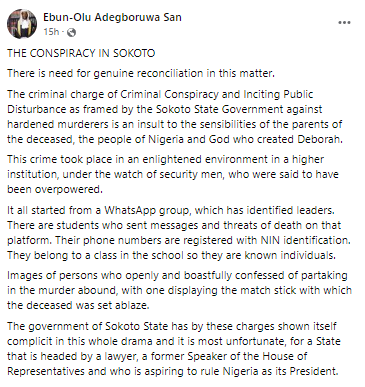 The post The charges of Criminal Conspiracy and Inciting Public Disturbance filed against Deborah Samuel’s murderers is an insult to the sensibilities of the parents of the deceased and God who created Deborah – Lawyer, Ebun Adegboruwa appeared first on Linda Ikeji Blog. Click Here to Visit Orignal Source of Article http://www.lindaikejisblog.com/2022/5/the-charges-of-criminal-conspiracy-and-inciting-public-disturbance-filed-against-deborah-samuels-murderers-is-an-insult-to-the-sensibilities-of-the-parents-of-the-deceased-and-god-who-created-deborah-lawyer-ebun-adegboruwa.html

Rivers State University student official gives her boyfriend an award for his “love, support, and care”