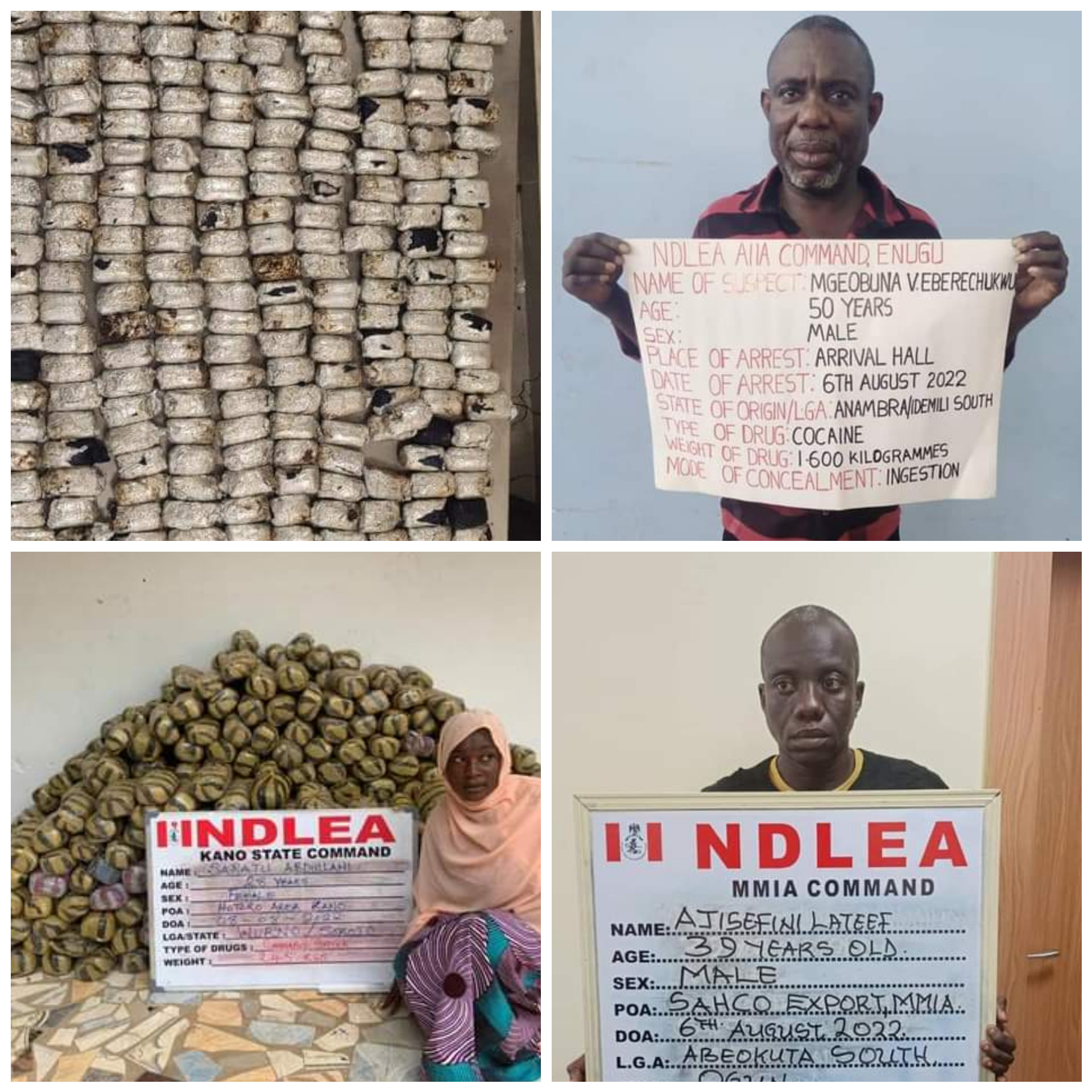 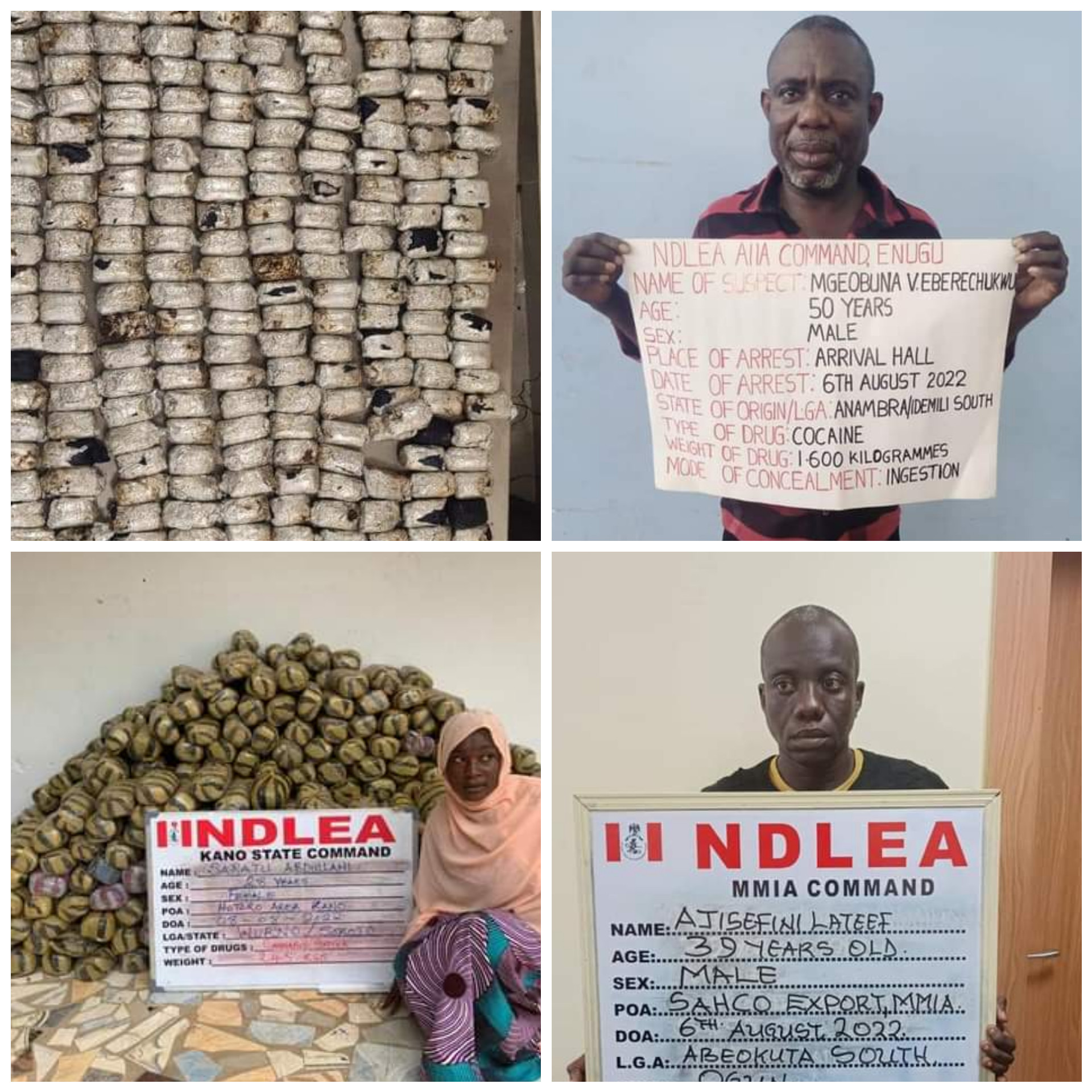 Operatives of the National Drug Law Enforcement Agency, NDLEA, have uncovered no fewer than Four Hundred and Forty Two (442) parcels of Crystal Methamphetamine concealed in heads of fishes packed in cartons for export to Dubai, the United Arab Emirates through the SAHCO shed of the Murtala Muhammed International Airport, Ikeja Lagos. Director, Media & Advocacy of the agency, Femi Babafemi, in a statement on Sunday, August 14, said the 11.90kg consignment was brought to the SAHCO export shed of the airport on Friday 5th August by a freight agent, Adekunle Oluwapelumi Paul, 32, from Yagba West LGA, Kogi State, who was promptly arrested upon the discovery that the seven cartons he presented for export contained parcels of the dangerous drug wrapped with foil paper and concealed in the heads of hundreds of smoked catfish. The following day, Saturday 6th August, another consignment containing 1.45kg cannabis concealed inside granulated melon and crayfish and packed among other food condiments going to Dubai, UAE was also intercepted by NDLEA operatives who arrested the freight agent, Ajisefini Lateef that presented the cargo for export at the SAHCO shed. The 39-year-old agent is from Abeokuta West LGA, Ogun State. Meanwhile, anti-narcotic officers at the Akanu Ibiam International Airport, Enugu have arrested a 50-year-old Mgbeobuna Victor Eberechukwu for ingesting 77 pellets of cocaine. He was arrested on Saturday 6th Aug following his arrival from Addis Ababa, Ethiopia onboard an Ethiopian airline flight. The suspect who hails from Idemili South LGA, Anambra state passed out the 77 wraps of the illicit drug in eight excretions spanning four days. In Kaduna, three suspects: Saifullahi Sani, Salisu Nafi'u and Abdulrazaq Mamman, were arrested in Zaria on Thursday 11th Aug. with One Million One Hundred and Twelve Thousand Three Hundred and Fifty (1,112,350) tablets of Tramadol (225mg and 100mg) weighing 38.3kg, while in Kano, a female drug dealer, Saratu Abdullahi, 28, from Wurno council area of the state was nabbed at Hotoro with 541 blocks of cannabis weighing 245kg. In Lagos, NDLEA operatives recovered a total of 1,773.25kg cannabis sativa at Ebutte-Meta and Akala in Mushin areas of the state in separate raid operations between 9th and 10th Aug. At the Tincan seaport in Lagos, 86 parcels of cannabis indica (Colorado) weighing 43kg were recovered from a 40ft container during a joint examination with Customs and other security agencies. The illegal consignment seized on Friday 12th Aug came from Toronto via Montreal, Canada and concealed in two drums inside a Mercedes Benz SUV in the container. In Abia, two suspects: Nnanna Ijo, 58, and Orji Uguru, 29, were arrested on Friday 12th Aug. with various quantities of cannabis, heroin and cocaine at Nde-Agbai, Abiriba, a week after Nnanna was released from detention over a similar offence committed in June. While commending the officers and men of MMIA, AIIA, Tincan, Kaduna, Kano, Lagos and Abia Commands of the Agency for the seizures and arrests, Chairman of NDLEA, Brig. Gen. Mohamed Buba Marwa (Retd) charged them and their compatriots across the country to always remain steps ahead of the drug cartels. 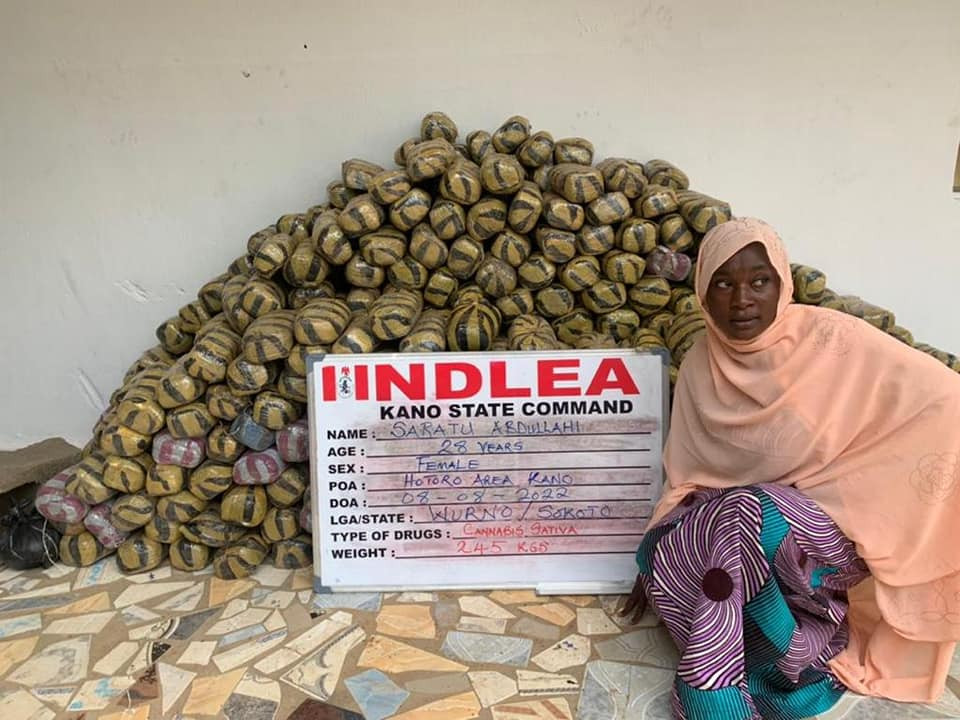 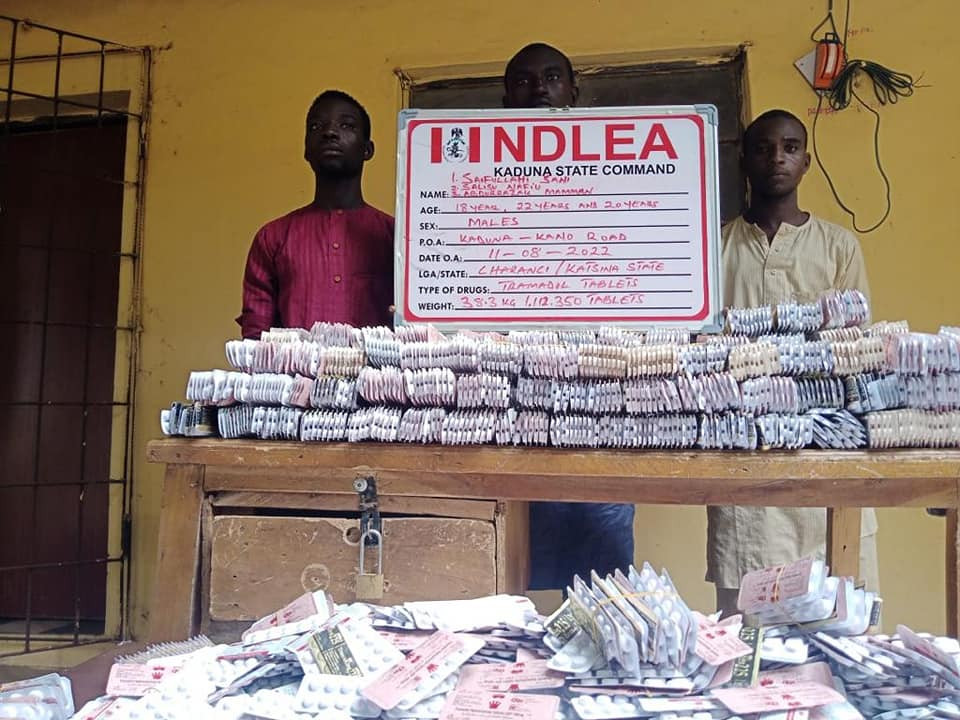 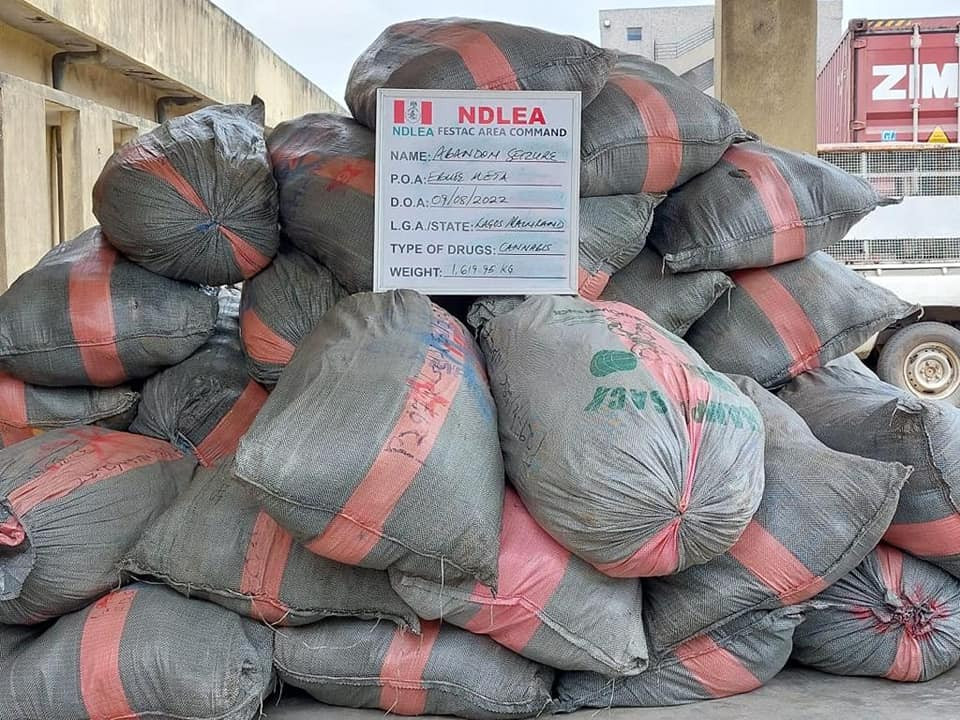 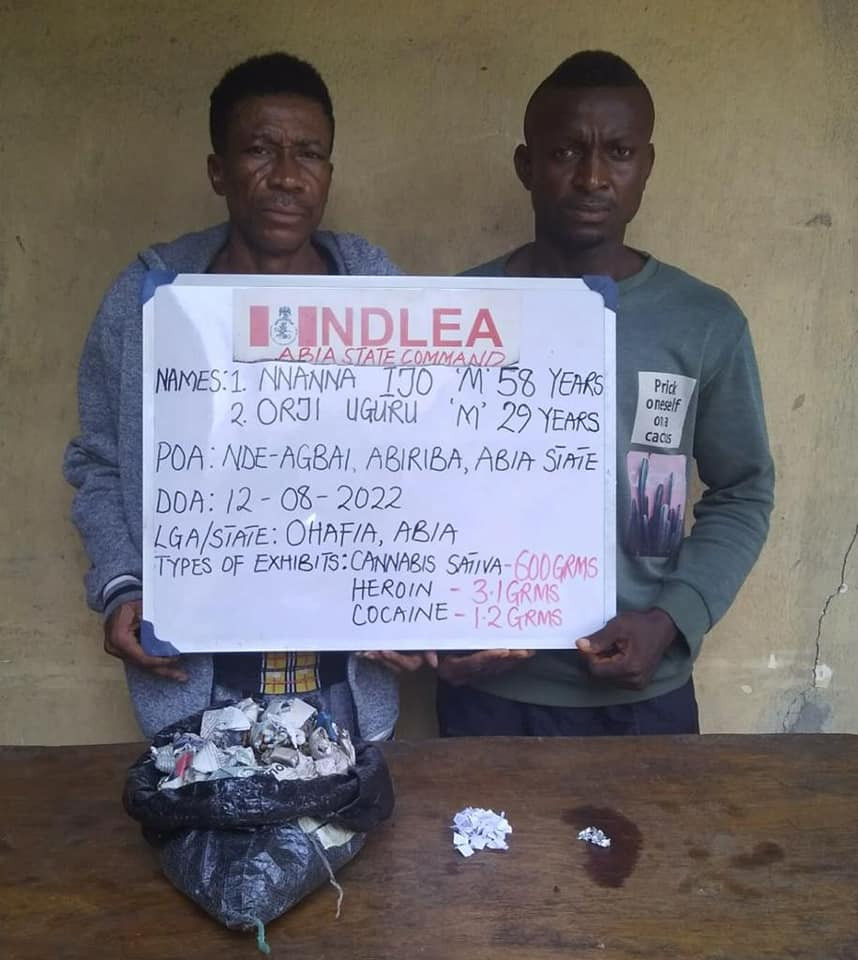 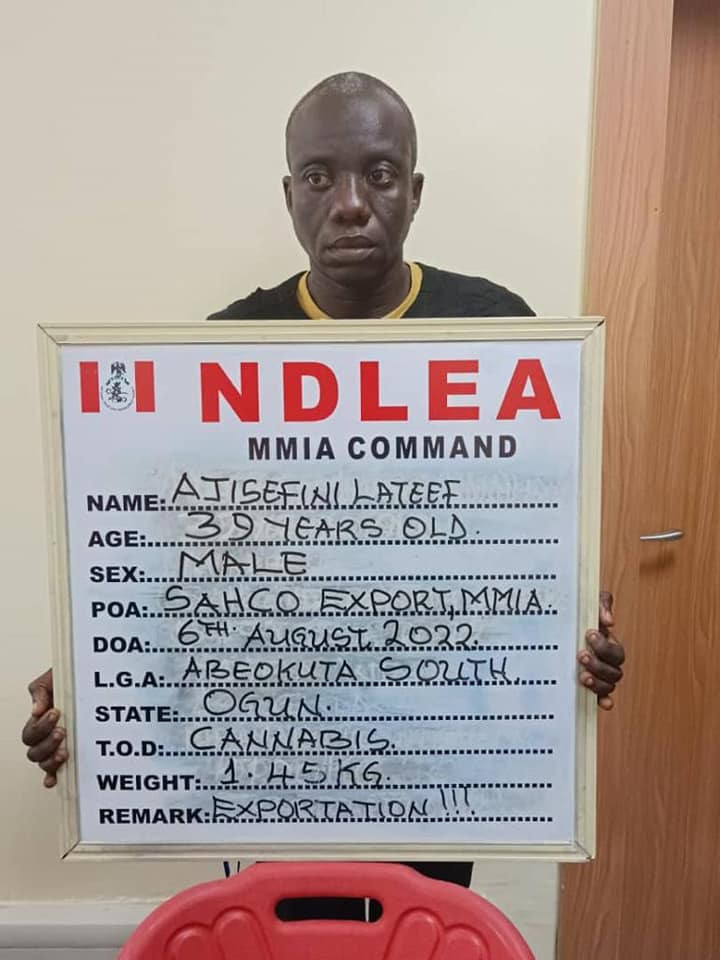 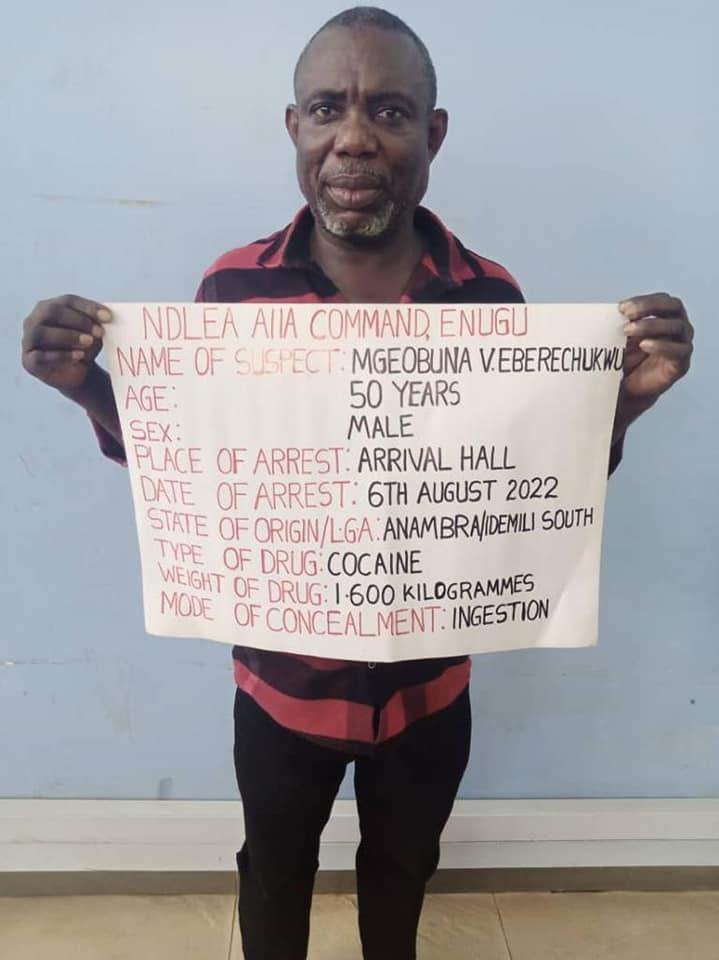 “While I was his orderly, he used to maltreat me and treated me as a slave” Naval officer cries out and accuses Rear Admiral I.O Mohammed of maltreatment (video)