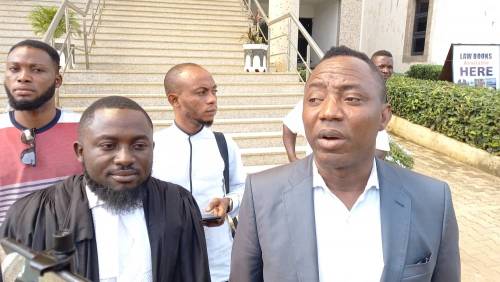 Human rights activist, Omoyele Sowore has said the Nigeria Police and their secret arm, Department of State Services are mobilising thugs to attack him and his associates at the Federal High Court in the capital city on Tuesday.

Sowore disclosed this on his Facebook page on Monday, saying, “Muhammadu Buhari’s Nigeria Police Force FCT command and the lawless DSS are mobilising thugs to attack us at the Federal High Court tomorrow. #peoplepower will prevail. #WeCantContinueLikeThis #RevolutionNow.”

It will not be the first time the activist’s life is in danger.

For instance, last Thursday, armed thugs attacked some of his associates in Abuja, inflicting injuries on them.

The attack occurred at about 9:00 am at Gudu in Abuja. The victims were on their way to the Court of Appeal to attend the hearing of an appeal filed by Sowore to challenge the ruling of the Federal High Court, which had declared one Leonard Nzenwa as the Acting Chairman of African Action Congress (AAC).

Similarly, some hoodlums believed to be sponsored by the Nigerian government on January 19 in Abuja attacked the activist and journalists at the Federal High Court, the venue of the ongoing trial of the leader of Indigenous People of Biafra (IPOB), Nnamdi Kanu.

The attackers descended on the activist shortly after he was turned back by operatives of the Department of State Service (DSS), who had barricaded the road leading to the court.

Last December, some armed thugs also attacked Sowore while attending the trial of Kanu at the Federal High Court, Abuja.

The activist who was in court in solidarity with Kanu was attacked in front of the court by armed thugs believed to be sponsored by the Buhari government.

Sowore was attacked shortly after he stepped out of the court as the attackers hurled stones and dangerous objects at him.

Meanwhile, Sowore on Sunday said the Nigerian government would on Tuesday charge him afresh for treasonable felony.

Sowore said, on Monday, he would likely face charges over “criminal defamation of one of Nigeria’s biggest crooks, Ned Nwoko”.

According to the activist, the fresh charges are being filed by the Muhammadu Buhari-led government over its fear that he will soon declare to run for President.

“On Monday I will likely face charges over ‘Criminal Defamation of one of Nigeria’s biggest crooks, Ned Nwoko’ and on March 1st the Nigerian govt will charge me afresh for ‘Treasonable Felony,'” he said on Sunday.

Reacting to the headline of a report saying, ‘Sowore To Make Presidential Declaration Next Week!’, the activist said it is the “reason they are very afraid”.

“No force on earth can stop an idea whose time has come,” he added, quoting Victor Hugo, who is regarded as one of France’s greatest poets to ever live.

A team of armed policemen who laid siege to the entrance of the Court of Appeal in Abuja had last Thursday arrested Sowore over a frivolous petition by a businessman and former member of the House of Representatives, Ned Nwoko.

He was taken to the disbanded Special Anti-Robbery Squad (SARS) unit, otherwise known as Abattoir, located at Guzape.

Speaking after his release, the activist said he was optimistic about becoming the next president of the country, adding that he was not threatened by anyone.

Earlier on Monday, the activist filed a lawsuit against Nwoko, and the Nigeria Police Force over his illegal arrest and detention last Thursday.

The suit is between Sowore and the Nigeria Police Force as the first respondent, the Inspector-General of Police as the second respondent, the Commissioner of Police, Abuja and Ned Munir Nwoko as the third and fourth respondents respectively.

Sowore is asking for an apology to be published in two reputable national daily newspapers and N200 million as damages for the violation of his rights, among other things.

AFRICANS SUFFERING FROM HYPOTHERMIA AT THE BORDER

Why I Won’t Resign As Minister Before APC Primaries – Presidential Aspirant, Godswill Akpabio