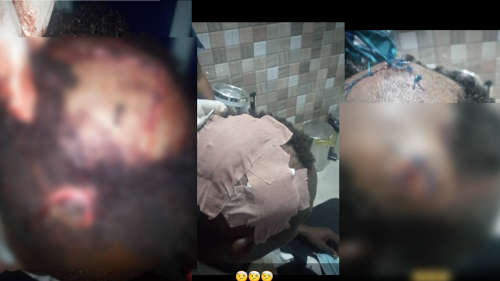 A woman, Anuoluwapo Saani, has accused Maroko Police Station of complicity in a case of assault against her brother who was recently physically assaulted by some ‘rich folks’.

Anu said her brother, Olajuwon Sanni, an event planner, had been invited by his boss for a catering project at Five Palm, Oniru Lekki.

She said her brother was about to discharge his duty when two rich young men approached him and asked for the delicacy he was in charge of — small chops.

Olajuwon, according to her account, asked the young men to take a seat inside the hall of the event but promised to get someone to serve them the small chops.

She said hardly had her brother taken his seat when he saw the same set of persons harassing his colleague, a personal assistant to his boss.

Olajuwon reportedly tried to settle the dispute when another young man hit him in the head with an iron chair and fled, leaving the young man bleeding.

According to her, the Personal Assistant, who was earlier harassed, was already bleeding but still visited the Maroko Police Station to report the case.

Anu said rather than arrest the culprits, the police officer, after being briefed by the family of the man who assaulted her brother, stated that the case should be left alone, persuading the victim to let peace reign.

She said her brother has since been admitted in the hospital with cuts on his head.

Anu cried out for justice stating that her brother’s assault was simply an attempted murder.

Speaking with SaharaReporters on Monday, she said, “My younger brother was seriously brutalised at his workplace by some rich folks some days ago 10/04/2021.

“His boss called him for a job at the Five Palm, Oniru Lekki event hall, he was in charge of the small chops. According to him, he was frying the small chops when two guys came to him and started shouting at him that he has refused to serve them small chops. He replied by telling them to go inside that he will ask someone to bring the small chops to them. Almost immediately, he looked backwards and saw the same guys beating up his boss’ PA, so he stood up and went to rescue the P.A from them because they had already broken a bottle they wanted to use to stab the guy.

“As my brother was trying to tell them to leave the PA alone, unknown to him, another guy was behind him. The guy carried an iron chair and hit it in the head, then, they ran away. My brother almost went flat on the floor unknown to him that he was already bleeding.

“It was his colleague that shouted Daniel, you are already bleeding, his boss came there, carried my brother in his car and the PA went straight to the police station to complain even as he was also bleeding so the police will see it is a very serious case.

“My brother asked the policeman that if it was vice versa, would he have been arrested, the police said yes but in this case, there was little he could do.

“I was shedding tears when I saw my brother‘s head with what the policeman said, it’s so terrible that even in our country, the authority cannot protect us. My family needs justice. My brother is still at the hospital though he is getting better but he needs to stabilise.”

Terms and conditions: How to get your refund from Air Canada